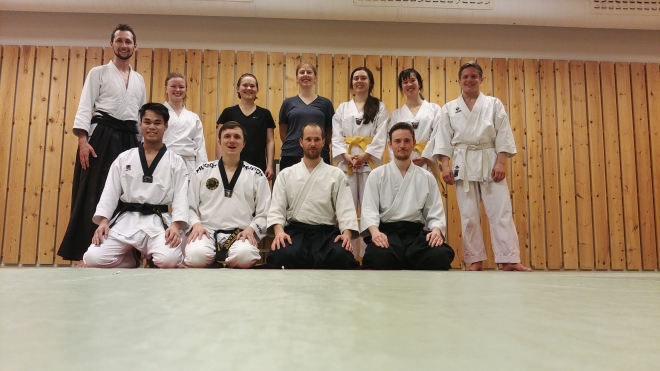 Last Thursday, on the 2nd of May, NTNUI Aikido and NTNUI Taekwondo had a joint practice session, which was awesome. I have wanted to try out Aikido so this was a perfect opportunity to do so, and the expectations were met. There was an even distribution of members from the two different clubs, which was really cool because we teamed up with people from the other club during the warm-up led by the Taekwondo instructor Sverre.
Afterwards we practiced a variety of Taekwondo kicks, both front-kicks and side-kicks. We all also skipped across the dojo in order to practice skipping into a kick.
Then we went on to practice some Aikido techniques, led by the Aikido instructor Wolfgang. We began with rolling, which I was excited about because rolling in Aikido-style looks really cool and smooth. The Aikido members were very helpful with feedback. We also practiced how to evade someone striking downwards at us with a bokken or a jo to strike downwards, which I found a bit scary in the beginning.
In addition, Wolfgang taught us how to defend against kicks, which was a bit tricky in the beginning, but due to the super-helpful guidance of the Aikido members, we Taekwondo members improved quickly. The rolling skills we recently acquired also came in handy when we as the attacker lost balance due to the defender grabbing our kicking leg.
Wolf told us we were welcome to join Aikido practices, which I think several of us Taekwondo members will do sometime, because this practice was loads of fun, and it was interesting to try out a different kind of martial arts. I think everyone improved and learned something new this practice. I am already looking forward to next time!