On December 5th, we had our yearly Christmas porridge. This year it was held at Viktória and Wolfgang’s place, a conveniently short walk from the Tuesday practice. We were nine people in total, enjoying homemade porridge and fruit salad for dessert. Pamela was the lucky (and very confused) finder of the hidden almond in the porridge and received the prize marzipan pig! Thanks, chocolate and nice words were given to Jean-Philippe, Marius and Kaare for their good work and history in the club, but the two latter were sadly not present to receive them. The night ended late with games and tea for the lucky few who didn’t have to catch the last buss home for the night. 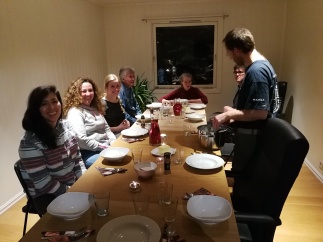