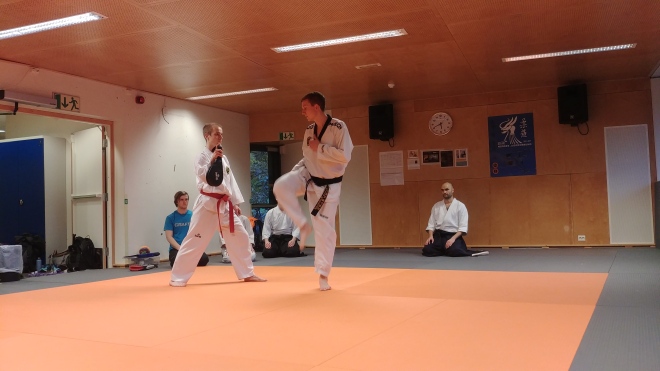 On Monday, October 8th the club joined with taekwondo and had another great experience with both sides learning forms and ideas outside of their respective system. The class was also especially noteworthy because it occurred during the beginners course where the beginners proved to be just as apt at picking up kicks as they are with aikido. They all continued to be nothing short of impressive. We started with some warm ups that really got the blood flowing as we kicked and jumped our way back and forth across the mat. Then the taekwondo instructor went over some kicks including a front, side, and roundhouse kick. After we got the basic idea he started having us put them together in combinations. The last one we did was a roundhouse followed by a sidekick  that had an interesting combination of speed and power and showed how, as in anything, timing is critical. At this point the instructors switched and aikido began showing how to defend against kicks. The kick we started with was done slowly but contained a lot of power that then could be used to displace the partner. The central theme was to enter before the kick landed and disrupt the kickers balance while their leg was up. We did a few variations on this theme and ended with a technique where you enter behind the kicker and take their balance from behind. Overall a very successful and fun class where everyone learned a lot about a different type of system. We are looking forward to the next one!